skip to main | skip to sidebar

Enjah has been working hard (very bloody hard!) on her new movie - and what a doozy! She's leapt from 2-3 minute comic shorts to a 9 minute drama set in the gorgeous seaside village of Cowell & mighty forest of Kahruvel. It's a tale of love, loss and tarot cards that will grip you from start to finish!

So, without further ado, I present the latest TSMGO Studio release of the Mysterio Production*, The Reading...

Lucy checks up on things

just checking, the doors were left open, the theatre itself has vanished, the blog has quite a bit of dust and mysteriously, lots of cat hair too.  strange echo in here!
Posted by Call Me Lucy at 1:59 PM 5 comments:

I received a nice enquiry today, so TSMGO! is in people's thoughts.

We develop a new show every year, and perform during our season, but currently we haven't started developing 2010s show in earnest, yet - although we have some of it outlined. We won't be ready to perform it until some time in the spring - not sure, yet, when, as we haven't started.
Posted by Osprey at 2:22 PM 2 comments:

The halloween special was a blast! Everyone was a zombie or ghoul and the audience came in an amazing variety of horrific outfits. We had two now acts, the Doctor & The Zombie and The Dance of The Ghouls, and both had exposive endings that showered the crowd in blood, bone and brains! 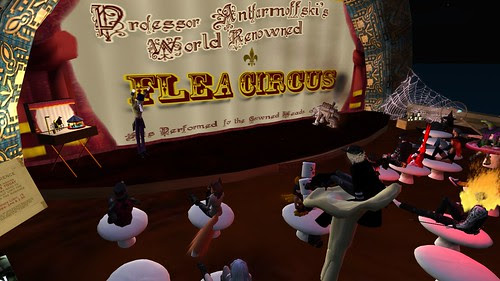 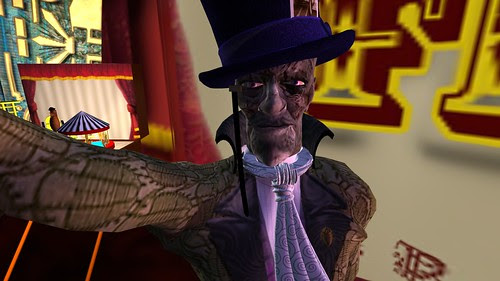 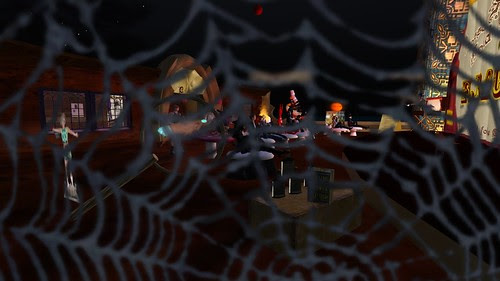 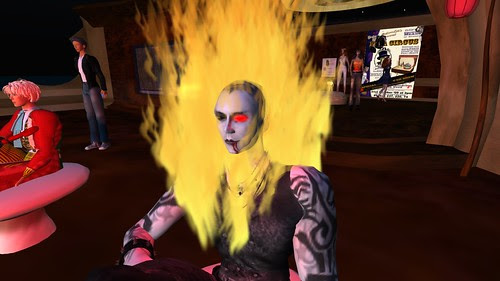 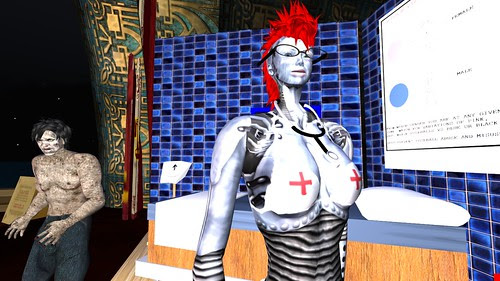 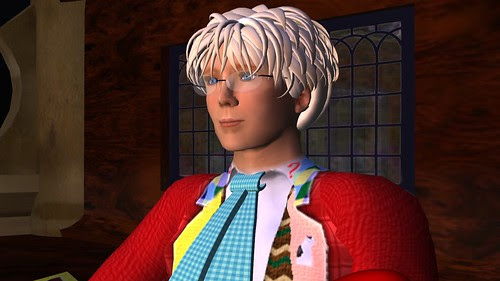 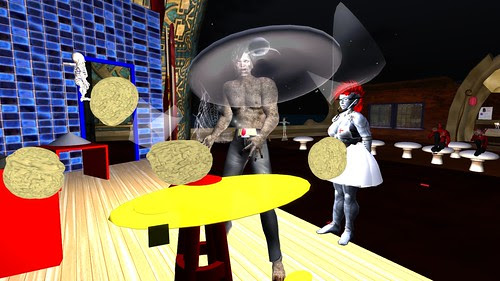 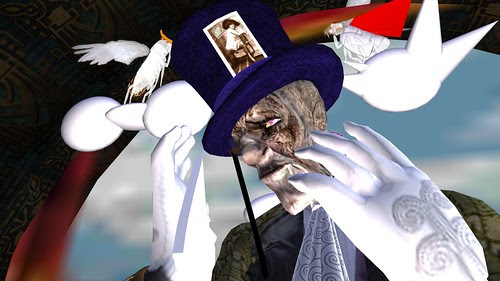 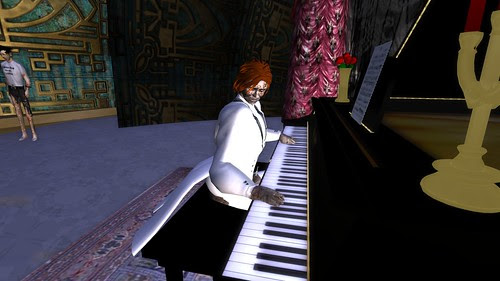 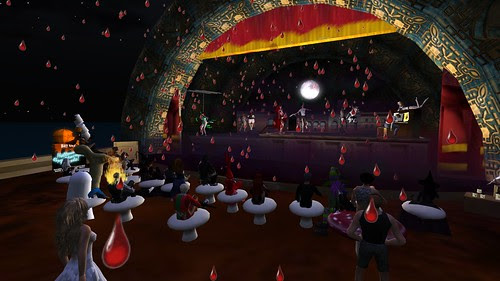 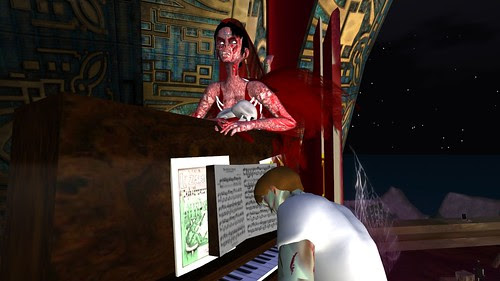 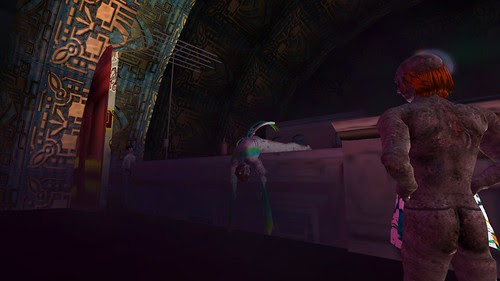 A Word From the Director

We've reached the final show of the 2009 season - and obviously, given that we fell dead to the ground and/or exploded during the last act in a rain of blood and internal organs, yesterday, you wouldn't like to see us back on the stage until we've visited the doctor. But, just as a way of wrapping things up, I'd like to say a few words about my currently active performers.*

Enjah Mysterio is a long-suffering partner-in-crime ready to leap into anything at a moment's notice. Although she can turn her hand to a wide range of things, I especially appreciate her ability to invent characters and bring them to life in both a making-avatar and a performing way, not to speak of her fine voice acting on a few acts. Thanks, Enj - U B Ossm.

Lucy Tornado looks at life from her perch in a beech tree, so naturally she sees things from a different perspective than those of us on the ground. AND THEN SHE WRITES ABOUT IT. o.O The results are unexpected, as you've undoubtedly seen. I appreciate so many things about Luceh, from her ability to build an act from scratch to her cheerfulness, but here's the mystery: how can someone so unpredictable be so dependable?

Karuna Sands is not just a flexible performer but someone I've learned to listen to, as on more than one occasion he casually lets drop a bon mot that is so funny, and so apt, I immediately run off to incorporate it into the show. Who do you think named the the airship theatre "The Lindenburg"? (Actually I think he said "der Lindenburg")

HeadBurro Antfarm has his a way with words - written and spoken - and glad I am that he has just the teensiest bit of ham in him, as his performances are memorable. In a short time he's become a mainstay of the show.

Kitty Zimmer, that naughty pussy, is an independent performer (you know how cats are) who will invent and perform her own solo acts, then turn right around and gamely leap into a group act with great aplomb. Although it's whispered she just may be an alt, if that's the case the typist must have personality to spare - Kitty is definitely her own charming self.

Alazi Sautereau dances with grace and style, choreographing her acts with many animations to express the music's flow. Her performances bring a note of beauty to our mayhem - and then she turns into a yak and all bets are off :-D

Kumi Kuhr is our newest victi... *cough* troupe member, and she has an advanced degree in Mayhemology (I believe she is engaged in finishing her thesis), which should come in handy. Cranking it up to 11, Kumi has already succeeded in making key members of the troupe turn queasy, no mean feat. An idea-generator for 11th notch mayhem - superb!

* Performers who aren't active at the moment deserve their own post, as there are many of them and we may get some of them back!
Posted by Osprey at 10:14 AM 2 comments:

Rot up! Rot up! Ghouls and Beasties, I have the distinct terror of announcing a special one night only re-animation of the show everyone is screaming about! 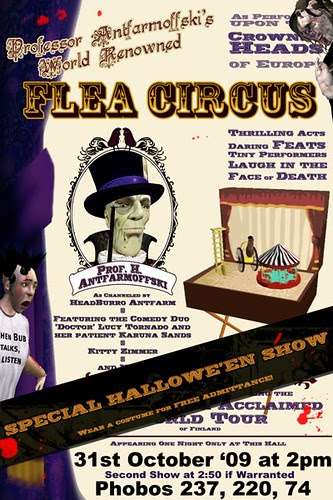 Creep along early to guarentee your plot and come in the scariest costume you can possess to see the undead treat with more than a few nasty tricks... BWAHAHAHAHAHA!

We rise from our graves at 2pm (SLT) on Saturday 31st October 2009 and then come back for a second bite of your brains at 2:50pm. So crawl your foul way to The Lindenburg in Phobos and make sure you don't miss the show where dying on stage is all part of the fun!
Posted by HeadBurro Antfarm at 5:25 AM No comments:

Jesper Prinz, long time friend of the show and talented SL artist, has some kind and choice) words to say about our humble little show - read them on his blog here :)
Posted by HeadBurro Antfarm at 6:10 AM No comments: